OBESITY EPIDEMIC OVERTAKES TOBACCO AS THE LEADING CAUSE OF CANCER 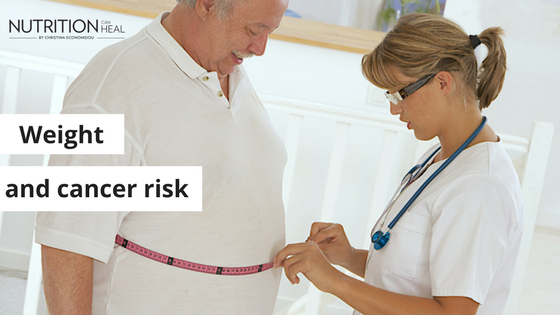 According to the World Health Organization, obesity is one of today’s most obvious, yet most neglected public health problems. An escalating global epidemic of overweight and obesity – “globesity” – is taking over many parts of the world.

The WHO warns that if immediate action is not taken, millions will suffer from an array of serious health problems, including cancer.

Obesity is a major under-recognized contributor to cancer and is quickly overtaking tobacco as the leading preventable cause of cancer. In the US it has been estimated that as many as 84,000 cancer diagnoses each year are attributed to obesity.

In 2012 an estimated 14.1 million new cases of cancer occurred worldwide.

Link between Weight and Cancer

The corresponding data for women were:

The table above shows how the relative risk for colon cancer increases both in men and women as the weight changes weight category.

Link between Weight and Cancer Mortality

The American Institute for Cancer Research (AICR) has estimated that every year 110,000 cancer deaths in the U.S. are caused by obesity. Obesity has become the second leading cause of cancer deaths, behind smoking.

In Europe, one of the largest studies on nutrition and cancer, The European Prospective Investigation into Cancer and Nutrition (EPIC), assessed the influence of being overweight on cancer. EPIC analyzed the relationship between a range of factors with the incidence of cancer. The study involved over half a million people in 10 European countries.

The results from EPIC and other studies show that cancer mortality increases by 10%, as the body mass index (BMI) increases by one category.

BMI is an indicator of weight category. It is used mainly to express possible risks to health associated with weight.

Link between Weight and Cancer Risk

In recent years cancer is beginning to be viewed more as a metabolic disease rather than a genetic one. Excess body fat, especially around the waist, causes several metabolic changes that create an internal environment within the body that promotes cancer growth and development.

How sugar and insulin are involved

One of the main mechanisms responsible for the causation of cancer is related to sugar metabolism. Sugar consumption per person has increased dramatically in the last few decades and a high sugar diet is one of the main causes of the world obesity pandemic. Recently, it has been discovered that the metabolism of cancerous tumors is largely dependent on sugar intake.

Excess body fat causes insulin resistance, resulting in high insulin levels in the blood. Insulin, is a hormone that is responsible for promoting the growth and reproduction of healthy cells, so it also stimulates the growth of cancer cells.

There are many other mechanisms involved in the relationship between weight and cancer.

Apart from insulin, the other major factor being involved in cancer development in overweight people is inflammation. Extra body fat is associated with chronic inflammation. Even low levels of continuous inflammation are capable of reducing immunity, increasing free radical production and causing cell damage.

Moreover, increased body fat is a primary source of hormonal deregulation. Fat cells produce estrogen leading to estrogen imbalance or dominance. Women with excess body fat tend to have higher levels of estrogen which promotes the growth of estrogen-sensitive cancers such as endometrial and breast cancer.

A lot of research also shows that being overweight, particularly if the excess weight is located around the waist (apple –shaped obesity), increases levels of substances circulating in the blood that stimulate cell division. The more often cells divide, the more opportunity there is for cancer to develop.

With the rising obesity rates globally and in particular among young children, it’s becoming extremely important that we all become aware of the link between weight and cancer. As a global community, every single person can help to prevent as many cancer cases as possible.

You all have a role to play in helping your loved ones maintain a healthy weight. For example you can help your parents, children or grandchildren, other family members and friends to enjoy healthy foods and move more. You can even be healthy role models for the people around you and inspire others to live a healthy and balanced lifestyle.

Maintaining a healthy weight may be the single most important factor that can protect against cancer. So making now the necessary changes to reach / maintain a healthy weight for you and your loved ones is more important than ever.