Vitamin D has traditionally been considered to be solely related to bone health. The scientific community has only recently begun to recognize the remarkable role of vitamin D in disease prevention and management. Nowadays vitamin D is considered to be a hormone rather than a vitamin and it has been shown to play a central role in the healthy functioning of our bodies and particularly in cancer prevention. 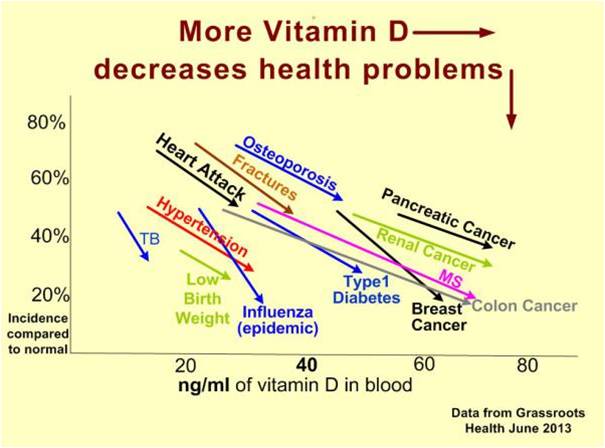 As seen in the graph above, various studies have shown that as the levels of vitamin D in the blood increase, the incidence of major health problems is reduced. More specifically, heart attacks, Type I diabetes and hypertension decrease. Low vitamin D levels also result in a malfunctioning immune system and an increase in cancer risk.

According to Michael F. Holick, PhD, MD, who heads the Vitamin D, Skin, and Bone Research Laboratory at Boston University School of Medicine, activated vitamin D is one of the strongest inhibitors of cancer cell growth.

Vitamin D is one of the most potent hormones for regulating normal cell growth. It was recently discovered that many cell types contain vitamin D receptors. When these receptors are activated by vitamin D the cells grow, function and multiply in a healthy way. Vitamin D inhibits abnormal cells’ development and blocks the invasiveness, uncontrolled angiogenesis and metastatic potential of cancer cells.

According to many researchers on Vitamin D, such as David Feldman, M.D., Professor of Medicine at Stanford University School of Medicine, data from a large number of studies strongly suggest that vitamin D deficiency increases the risk of cancer development. Avoiding deficiency is critical in reducing  cancer incidence and improving the outcome of any cancer treatment.

Cancers of the gastrointestinal tract

The protective relationship between sufficient vitamin D status and lower risk of cancer has been found in many studies. A study by Frank and Cedric Garland back in 1989 found that low levels of vitamin D in the blood (below 20 ng/mL), were associated with a doubling of the risk of developing colon cancer. A similar study for colorectal cancer found that a blood level of vitamin D of 34 ng/mL could reduce the incidence by half, whereas a level of 46 ng/mL could further reduce it by two thirds.

A study done in 2009 in Canada looked at a group of women who had an early stage of breast cancer and followed them over 12 years. They found that in women who have breast cancer, low levels of vitamin D are linked to worse outcomes like bigger tumors and cancer spreading to other parts of the body. 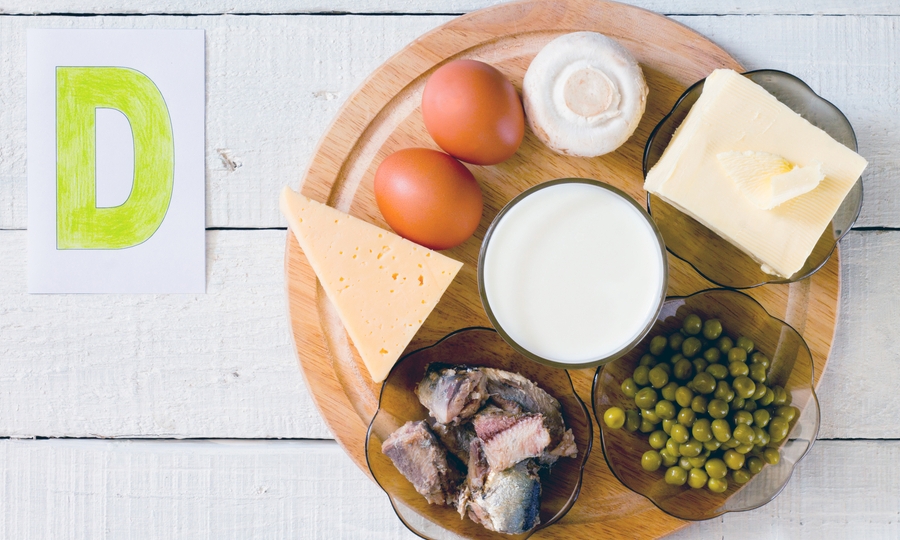 Vitamin D can be synthesized by the body when we expose our skin to the sun, and to a lesser degree it can be provided by our diet. Ultraviolet rays from the sun, the UVB rays, trigger the production of vitamin D in the outer layer of the skin.

Blood vitamin D level is among the most important factors related to the risk of developing cancer and a wide variety of other diseases. Vitamin D in the blood is measured in ng/ml or in nmol/l. To convert ng/ml to nmol/l multiply by 2.5 and to convert nmol/l to ng/ml multiply by 0.4.