One of the great breakthroughs in cancer research has been the evolution of epigenetics. This considerably new science has unlocked the secrets of how our genes behave. Bioactive compounds from our diet control the expression of our genes and are able to turn cancer genes on and off. One of these bioactive compounds is curcumin, the main bioactive compound found in one of nature’s top healing spices – turmeric.

In today’s article you are going to discover why turmeric has gained the title of the best anticancer spice and explore the latest research on curcumin and cancer. I will also present how curcumin can help people currently doing cancer therapies.

Cancer rates in India are much lower than in western countries, and daily turmeric consumption is believed to play a key role in the huge differences in cancer development. People in India have one eighth as many lung cancers, one ninth as many colon cancers, one fifth as many breast cancers and one tenth kidney cancers, when comparing people of the same age. 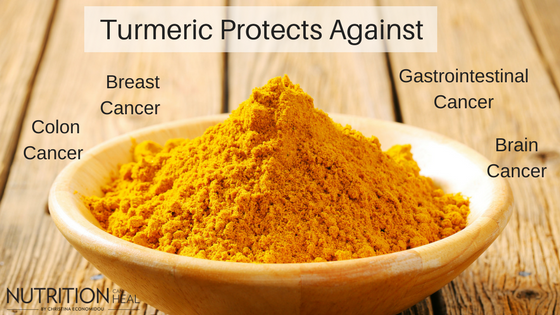 Curcumin is the Golden Spice from Indian saffron, as characterized by Professor Bharat Aggarwal, head of the lab working on experimental cancer therapies at the M.D.Anderson Cancer Center in Houston. Professor Aggarwal is a pioneer cancer researcher who strongly believes and extensively studies the anti-cancer effects of curcumin.

Curcumin has been studied extensively for its anticancer properties and we now have strong scientific data that show that curcumin kills cancer cells and slows tumor growth.

Curcumin acts on hundreds of cellular pathways and appears to be useful for just about every type of cancer. More specifically, curcumin has been found to:

Another discovery that is extremely important is the ability of curcumin to sensitize many human cancers to chemotherapy and radiation. The use of a curcumin-based, anticancer therapeutic strategy will hopefully allow in the future the use of lower doses of chemotherapeutic drugs and radiation but still achieve much higher anti-cancer results.

In animal models curcumin was found to be very effective in protecting normal cells from the toxic effects of chemotherapy and radiotherapy. This lower toxicity and enhanced protection was seen in a number of body systems as curcumin was effective in:

Curcumin also enhanced the repair of wounds in mice exposed to whole-body radiation.

Curcumin is a safe and highly effective compound that can be used both in the prevention and also along standard cancer therapies.

Two key curcumin researchers, A.Goel and B.Aggarwal, reported in the Journal “Nutrition and Cancer” in 2010: “Curcumin therapy may stop cancers before they become invasive and metastatic. These effects combined with its ability to prevent depression, fatigue, neuropathic pain, lack of sleep, and lack of appetite, all symptoms induced by cancer and cancer treatment, makes curcumin an ideal agent for cancer patients”.

Tips for Curcumin Absorption and Choosing a Supplement

In order to achieve the optimum therapeutic power of curcumin, cancer patients often need the help of curcumin supplements.

Supplements are nowadays formulated to improve curcumin absorption and bioavailability. Choose a supplement that contains liposomal curcumin (contains fat molecules that allow curcumin to be more available to the body) or piperine (a component of black pepper known to increase curcumin absorption).