Many people believe that cancer is inevitable, that it is someone’s fate to have cancer and that each person’s risk is “written in their genes”. Unfortunately, this myth is also fueled by a large portion of doctors who overlook the role of lifestyle and nutrition on cancer development. Many oncologists even discourage their cancer patients to integrate a nutritional approach in their treatment plan, advising their patients to eat whatever they want and suggesting that their disease development and progression has nothing to do with their diet.

In this article we are going to present the truth about diet and cancer and learn the scientific truth debunking the myth that cancer is simply “written in the genes”.

Cancer CAN be prevented

Data from the American Cancer Society, the National Cancer Institute and other official organizations agree that only 5 to 10% of all cancer cases are linked to genetic factors and hereditary cancer syndromes.

The majority of cancers (90-95%) are caused by changes in our genes that occur throughout our lifetime and are triggered through our environment and lifestyle. Revolutionary researchers have discovered that our genes interact with our environment and with the foods we eat. Food is an important epigenetic modulator – it can change our DNA and how it is expressed, it can basically turn cancer genes on / off.

What about people with an increased genetic risk?

When the team examined the lifestyle and diet of those high risk women, they found that their diet had the power to change the risk status that was imprinted in their genes.

This study is an inspiration to me as it provides strong evidence that cancer is not just “written” in one’s genes. It reinforces a very important message: that we all have a role and responsibility in protecting our bodies against cancer by the choices we make.

Optimum nutrition can be significantly protective

even in people with high genetic risk.

Click the link to continue reading about the “4 Key Features of the Anticancer Diet “ to get a deeper understanding of how the foods we choose can help prevent and treat cancer. 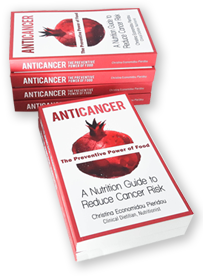 A personal message to you

My book “Anticancer – The Preventive Power of Food” is an easy tool you that will guide you step by step to the right changes to significantly reduce cancer risk.