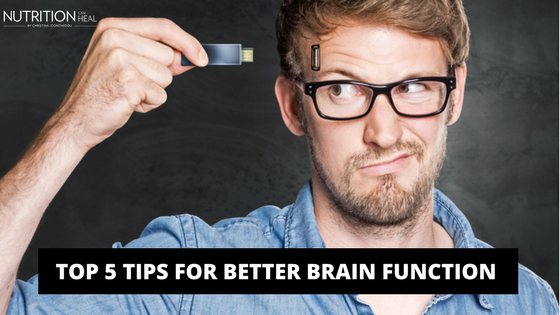 Do you keep forgetting things? Do you often feel down or suffer from headaches? Read the article below to learn about how you can “feed” your brain to achieve better brain function, concentration and much more!

Vitamin D deficiency, which unfortunately is very common, is associated with an increased risk of dementia and depression.

Depression affects about 840 million people worldwide. Vitamin D is not actually a vitamin but a unique hormone with many important roles in the body. Receptors for vitamin D are present in many areas of the brain and vitamin D is involved in numerous brain processes including neuroprotection, neuroplasticity and brain development. Over two-thirds of the populations of the USA and Canada have low levels of vitamin D and many studies show that low vitamin D levels are associated with depression.

Magnesium deficiency is linked to headaches, dizziness, poor concentration and nervousness. Studies have found that patients with cluster headaches and classic or common migraine, especially menstrual migraine, have low levels of magnesium. In a study published in the Journal of Headache Pain in 2015, 81 people with migraine were split in two; half received magnesium supplements (600 mg per day) and half received a placebo for 12 weeks. The group receiving the magnesium supplements had a statistically significant improvement in the number of days without migraine and used significantly less medication for treating their migraines.

Your brain is made mostly of fat, so good fats are valuable for your brain. Omega-3 fatty acids can help mood, memory and concentration.

Docosahexaenoic acid or DHA is an omega-3 fatty acid that represents more than 90% of the omega-3 fatty acids in the brain. It performs structural functions in the brain and has been shown to be stored in areas of the brain involved in memory and attention. Animal studies have shown that deficiency in brain DHA has critical effects on behavior, including changes in learning, memory, and sensory responses. Unfortunately DHA cannot be synthesized by the body and has to be consumed in sufficient amounts by the diet.

4. Add Probiotics to your diet

Recent studies indicate that healthy bacteria living in the gut are critical for normal brain development and function.

Scientists have discovered that there is a strong link between gut bacteria and the brain and that the two communicate via a number of neurotransmitters. Various lifestyle factors such as a diet low in fiber, high in sugar and processed foods, stress and antibiotics create an unhealthy bacterial balance in the gut leading to increased anxiety and depression.

One of the main mechanisms by which the mind’s function deteriorates with age is as a result of inflammation. Turmeric is a spice that belongs to the ginger family that has been extensively studied for its strong anti-inflammatory power.

Turmeric has been shown to be a great natural mood enhancer. It also boosts cognitive function by protecting brain cells. Animal studies have shown that curcumin, the active ingredient in turmeric has the ability to prevent or reverse deficits in memory and cognition associated with aging. In a study published in the Journal of Psychopharmacology, curcumin supplementation in healthy adults significantly improved attention, memory and mood (measured as a sense of calmness, contentedness and fatigue).